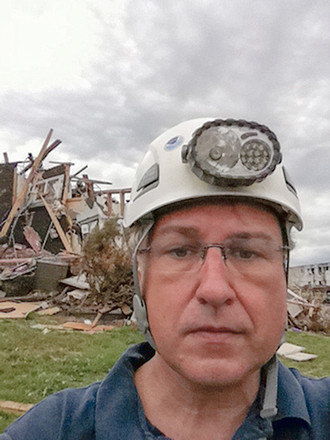 Jim Reed is an internationally renowned, award-winning photographer, filmmaker and writer best known for his images of extreme weather. In 1991, he began a 30-year project to document climate change and its impact on the United States. 2021 marks Jim's 30th and final year of photographing extreme weather, including tornadoes, blizzards, floods, drought and 19 hurricanes, including Katrina.

Jim is a National Geographic contributing photographer and is represented by Getty Images, Science Source and Science Photo Library. His work has been published in National Geographic, The New York Times, Scientific American, Popular Science, and The Guardian, among many others. He is the author of the critically acclaimed photo book "Storm Chaser: A Photographer's Journey" (Abrams, New York).

Jim has been featured in numerous TV weather shows and specials, including ABC 20/20, The Weather Channel, The Discovery Channel, and Oprah, and has received many awards for his work from, among others, Communication Arts, Photo District News, American Photography, Photo Review, and Prix De La Photographie Paris. His photography has been acquired by private collections and corporations in the U.S. and abroad.

Jim was born in Albany, Georgia, raised in Springfield, Illinois, and received a BFA in creative arts from the University of Southern California in Los Angeles. He documented his first severe weather event at the age of 16. Although he shifted from writing to photography early in his career, he remains a dedicated documentarian and believes his journalistic insight contributes to his photographic projects.

American PHOTO magazine writes, "Jim Reed is clearly more than a great storm chaser who risks his life to create iconic images of extreme weather. He's a heartfelt environmentalist whose real mission is to encourage us all to adapt a more healthful and prudent lifestyle in dealing with this era of increasing weather challenges."